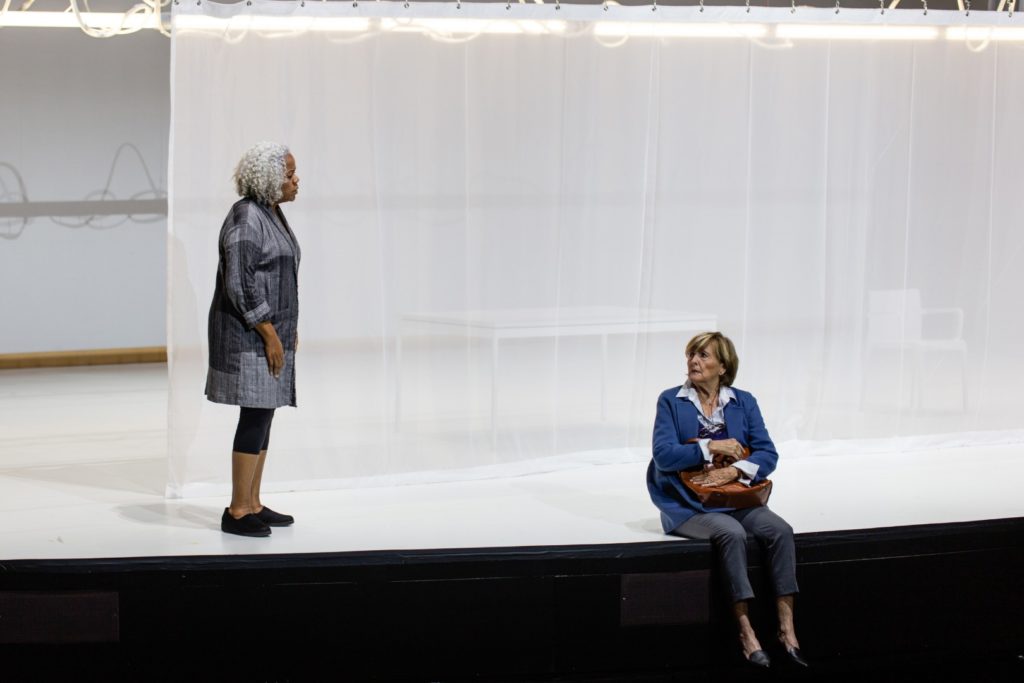 There is something deceptive about the set design for Sky on Swings, an original opera that debuted at the Perelman Theater in Philadelphia in 2018.

The stage is barren, not much more than two walls and a floor—everything painted white. Occasionally, there is a table and some chairs, but mostly the set is empty, blank. Like a mind bereft of thought and memory.

But this vacant set belies the complexity of Sky of Swings. Around halfway through the production, the stage comes alive with swirling lights, billowing curtains, intersecting shadows—and orchestral music so ornate it’s practically a set piece all its own. 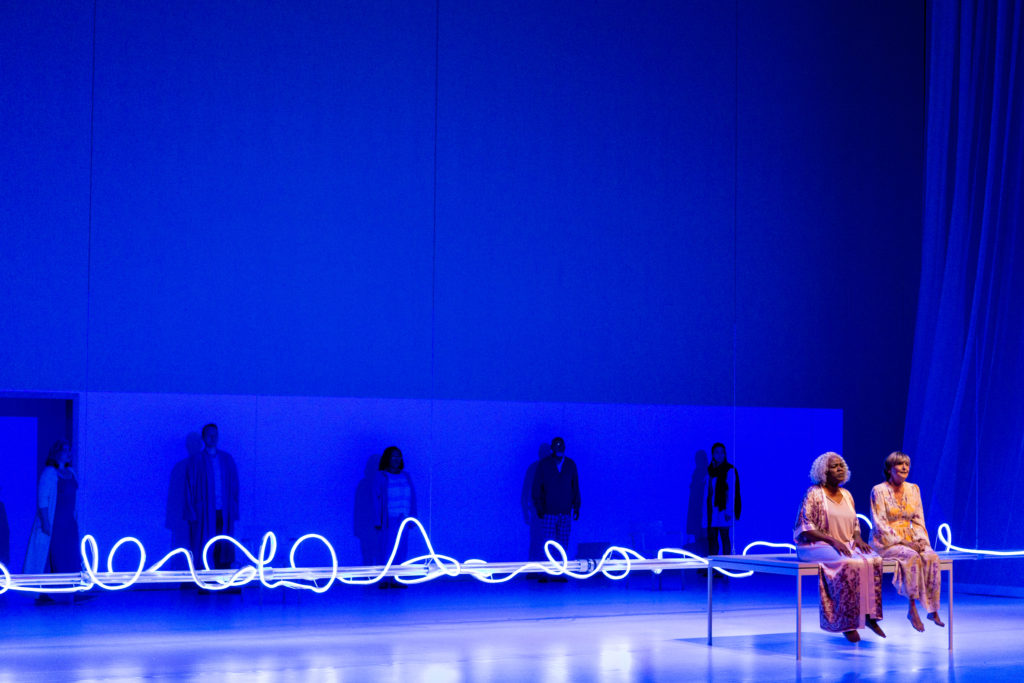 This premise may sound like a tough watch—one of those stories that is sure to take a piece out of you. And, to an extent, it does do that. But Sky on Swings is the rare Alzheimer’s story that acknowledges the emotional, psychological, and familial wreckage of dementia while also insisting that there is life after diagnosis. Full and enriching life. What begins as tragedy slowly develops into something closer to romance.

Sky on Swings follows Martha (played by mezzo-soprano Marietta Simpson) and Danny (fellow mezzo Frederica von Stade), two women at different stages of Alzheimer’s who meet in the nursing home where they’ll no doubt live out the rest of their lives. Or, as Danny says in a fit of exasperated rage, where, “I’ll lose my fucking mind and die.” 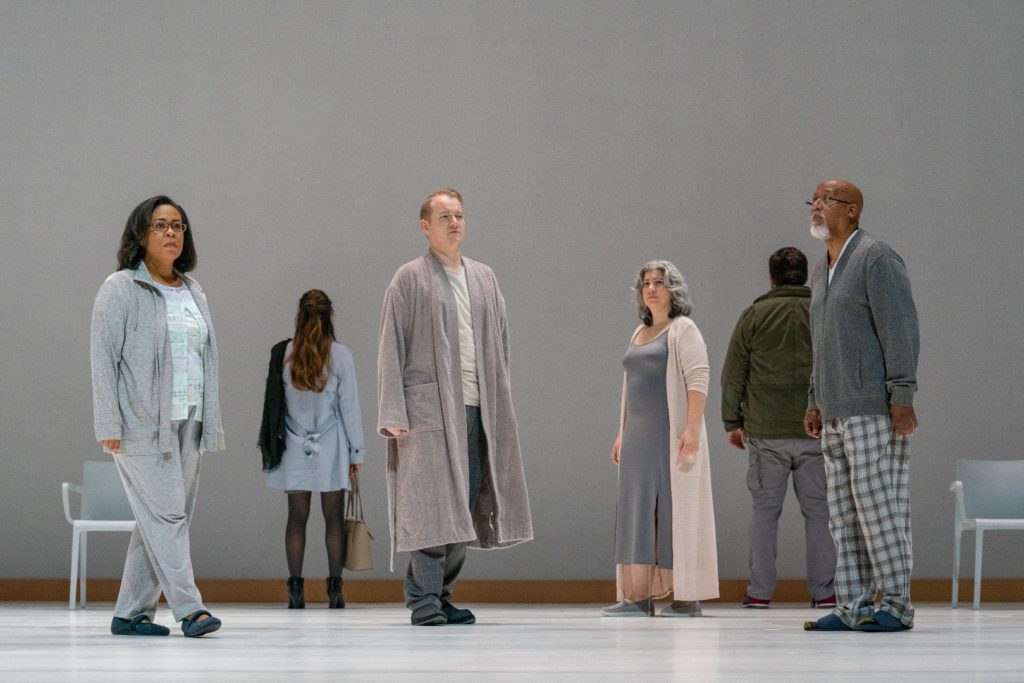 “I think I’ve used more F-bombs in [Sky on Swings] than I’ve used in the last 20 years,” said von Stade, a world-renowned singer and six-time Grammy nominee. She described Danny as a high-powered scientist who “depends on her mind for her life. She’s immediate and aggressive.”

Danny is newly diagnosed with Alzheimer’s when the show begins, and she is still very much going through the stages of grief, begrudgingly moving toward acceptance. “What’s happened to her is not more brutal by any means,” said von Stade, “but there’s really no acceptance of it. The only acceptance she can find is through her relationship with Martha.” 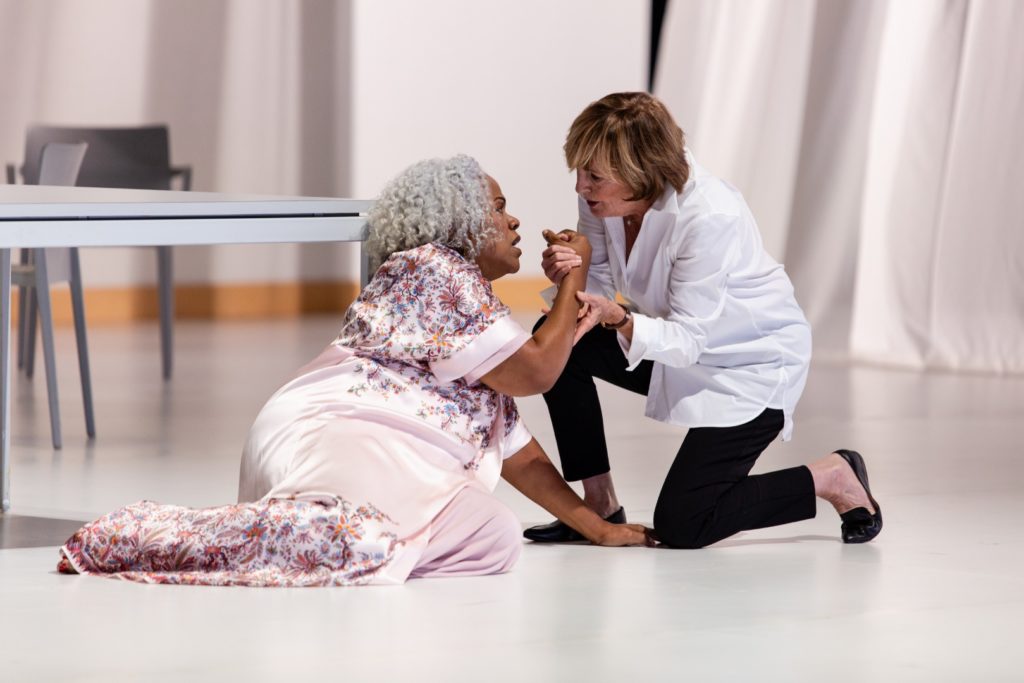 The more stoic of the two, Martha, played with poise and gravitas by Marietta Simpson, has been living at the nursing home for many months by the time Danny arrives. At a more advanced stage of Alzheimer’s, Martha has accepted the disease more than her new friend. But she’s no less frustrated by it. At times, she unravels, overcome by despair.

During one sequence, Martha’s search for a pack of matches escalates into a manic episode, with Simpson frantically repeating the words, “I know, I know, I know, I know I can find it.” As her confusion and turmoil intensifies, a tempest of light and sound erupts onstage: colors flash, curtains swell, and the music grows chaotic and brambled. 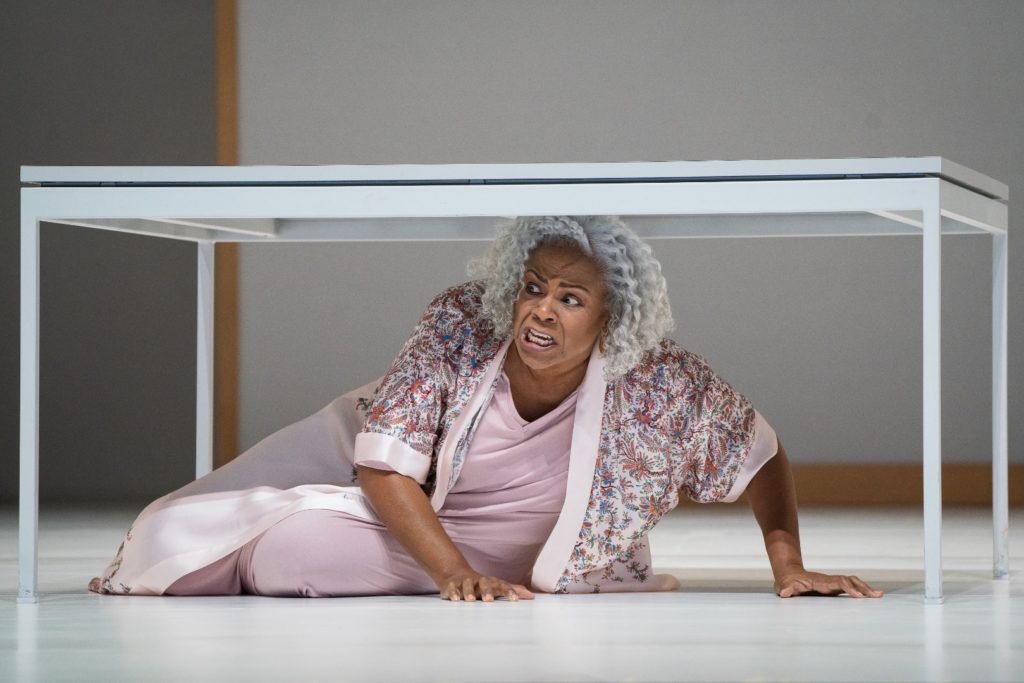 It’s an effective sensory display of a mind in disarray.

The orchestral music of Sky on Swings—created by composer Lembit Beecher, who once served a three-year term as Opera Philadelphia’s inaugural Composer in Residence—achieves the remarkable goal of capturing Danny and Martha’s frail and complex interior lives.

One of the novel ways the music conveys the discord of the women’s thoughts and memories is by “finding moments that are slightly suggestive of other styles of music,” said Beecher. “Buried within a lot of the score there’s some Mahler and Bach,” and other works. Shades of other pieces of popular music floating in the score like partial memories.

“But I always tried to keep it at a level where, even if you’re looking for it, you wouldn’t be quite sure what it was,” the composer added. “I never wanted to get to a point where someone listening would say, ‘Oh right, I know that.’ Because I think that’s [what it’s like] being in the world of Alzheimer’s, where things sound sort of familiar but you have no idea why.”

Throughout Sky on Swings, “the orchestral music begins to stretch out or disintegrate,” evoking a sense of mental deterioration, Beecher said. However, as the score becomes more scattered and fragmented, “the music for the two leads becomes kind of an anchor. There is something really beautiful about the strengths of their voices as a constant.”

The idea of “capturing” the experience of Alzheimer’s disease—and to what extent that can be done accurately in an opera—was discussed early and often during the production process, Beecher said. To learn more about the disease, the composer, along with librettist Hannah Moscovitch and director Joanna Settle, read many papers, watched videos online, and spoke with several experts at the Alzheimer’s Association and the University of Pennsylvania.

That being said, “I do think we realized at some point that the piece ultimately had to be about two characters. It wasn’t going to say everything there was to say about Alzheimer’s. The thing that was most striking in all the research I did, and in speaking to people, was just how much variation there is. How every case is unique,” said Beecher.

“We wanted the focus of the piece to be the experience of Alzheimer’s, and to try to get into the emotional and psychological state of someone who has Alzheimer’s. Ultimately, science can only tell us so much,” he added.

Frederica von Stade agreed: “There are common denominators, but the experience and the degree of dementia is different for every single person that has it. Above and beyond everything, this is a story about two women and their kids.”

What the cast and crew eventually fully realized was just how prevalent Alzheimer’s disease is in modern America. Being so weighted with pain and trauma, some patients and loved ones choose not to talk about the disease—which can make it seem rarer than it is. But with 5.7 million Americans currently living with Alzheimer’s, the disease and its effects are nearly ubiquitous. Learning this was instructive and powerful for the crew, Beecher said.

“We were doing a talk about [Sky on Swings] a week or two ago,” he recalled, and, at one point, director Joanna Settle said, “You know, people often wonder about your qualifications when you’re doing a piece about a specific topic. But with something like Alzheimer’s, all you really need to do is lift up your head. It’s all around you.

Dutch Godshalk is an independent journalist living in Philadelphia. His work has appeared in Billy Penn, Thrillist, Men’s Health, Time Out, The Guardian, and most Digital First Media Philly titles. He also works closely with the University of Pennsylvania Health System. Email: godshalkd@gmail.com. Twitter: @DutchGodshalk.