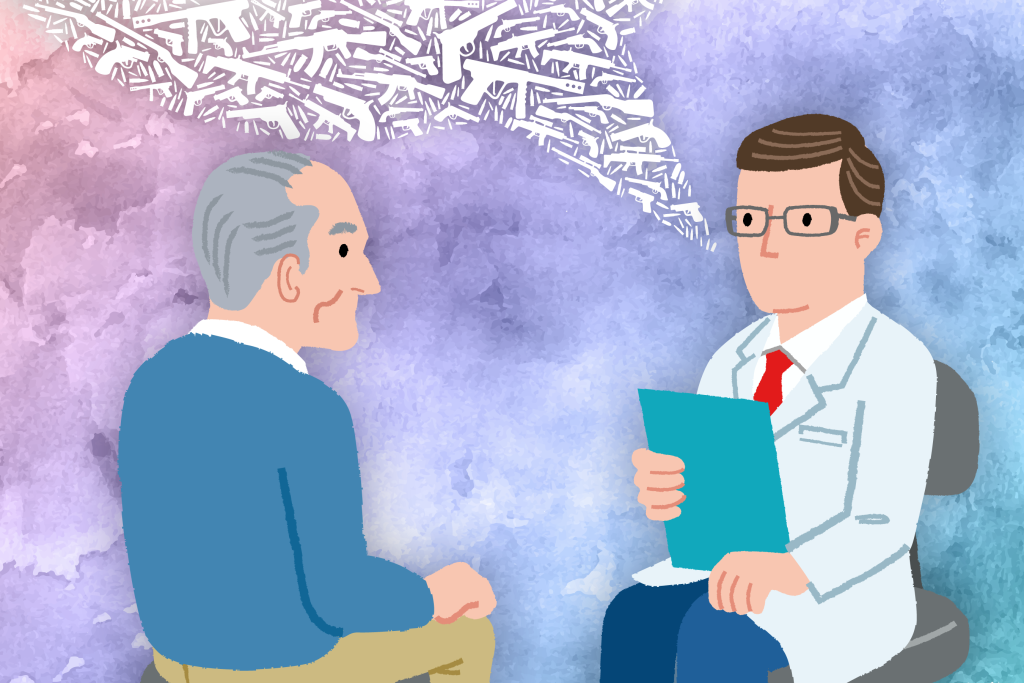 Some patients refuse to answer. Many doctors don’t ask. As the number of Americans with dementia rises, health professionals are grappling with when and how to pose the question: “Do you have guns at home?”

While gun violence data is scarce, a Kaiser Health News investigation with PBS NewsHour published in June uncovered over 100 cases across the U.S. since 2012  in which people with dementia used guns to kill themselves or others.  The shooters often acted during bouts of confusion, paranoia, delusion or aggression — common symptoms of dementia.  Tragically they shot spouses, children and caregivers.

Yet health care providers across the country say they have not received enough guidance on whether, when and how to counsel families on gun safety.

Dr. Altaf Saadi, a neurologist at UCLA who has been practicing medicine for five years, said the KHN article revealed a “blind spot” in her clinical practice. After reading it, she looked up the American Academy of Neurology’s advice on treating dementia patients. Its guidelines suggest doctors consider asking about “access to firearms or other weapons” during a safety screen — but they don’t say what to do if a patient does have guns.

Amid a dearth of national gun safety data, there are no scientific standards for when a health care provider should discuss gun access for people with cognitive impairment or at what point in dementia’s progression a person becomes unfit to handle a gun.

Most doctors don’t ask about firearms, research has found. In a 2014 study, 58 percent of internists surveyed reported never asking whether patients have guns at home.

“One of the biggest mistakes that doctors make is not thinking about gun access,” said Dr. Colleen Christmas, a geriatric primary care doctor at Johns Hopkins School of Medicine and member of the American Neurological Association. Firearms are the most common method of suicide among seniors, she noted. Christmas said she asks every incoming patient about access to firearms, in the same nonjudgmental tone that she asks about seat belts, and “I find the conversation goes quite smoothly.”

Recently, momentum has been building among health professionals to take a greater role in preventing gun violence. In the wake of the Las Vegas shooting that left 58 concertgoers dead last October, over 1,300 health care providers publicly pledged to ask patients about gun ownership and gun safety when risk factors are present.

The pledges came in response to an article by Dr. Garen Wintemute, director of the Violence Prevention Research Program at the University of California-Davis. In response to feedback from that article, his center has now developed a toolkit called What You Can Do, offering health professionals guidance on how to reduce the risk of gun violence.

In a nation bitterly divided over gun ownership issues, in which many staunchly defend the right to bear arms under the Second Amendment, these efforts have met dissent. Dr. Arthur Przebinda, director of Doctors for Responsible Gun Ownership, framed Wintemute’s efforts as part of a broader anti-gun bias on the part of institutional medicine. Przebinda said asking physicians to sign such a pledge encourages them “to propagandize Americans against their constitutionally protected rights to gun ownership and privacy.”

Przebinda said he gets several requests a day from patients looking for gun-friendly physicians. Some, he said, are tired of their doctors sending them anti-gun YouTube videos and other materials. His group, which he said has over 1,400 members, has set up a referral service connecting patients to gun-friendly doctors.

For doctors and other health professionals, navigating this politically fraught issue can be difficult. Here are the leading issues:

Is it legal to talk to patients about guns?

Yes. No state or federal law bars health professionals from raising the issue.

Why don’t doctors do it?

The top three reasons are lack of time, being unsure what to tell patients and believing patients won’t heed their advice about gun ownership or gun safety, one survey of family physicians found.

“There’s no medical or health professional school in the country that does an adequate job at training about firearms,” Wintemute argued. He said he is now working with the American Medical Association to design a continuing medical education course on the topic.

Other doctors don’t believe they should ask. Przebinda argues that doctors should almost never ask their patients about guns, except in “very rare, very exceptional circumstances” — for example, if a patient is despondent or homicidal. He said placing patients’ gun ownership information into an electronic medical record puts their privacy at risk.

When should they broach the subject?

The Veterans Health Administration recommends asking about firearms as part of a safety screening when “investigating or establishing the suspected diagnosis of dementia.” The Alzheimer’s Association also recommends asking, “Are firearms present in the home?” as part of a safety screening. That screening is part of a care planning session that Medicare covers after initial dementia diagnosis and annually as the disease progresses.

The American College of Physicians recommends physicians “counsel patients on the risk of having firearms in the home, particularly when children, adolescents, people with dementia, people with mental illnesses, people with substance use disorders, or others who are at increased risk of harming themselves or others are present.”

Wintemute said he does not suggest all doctors routinely ask every patient about firearms. His group recommends doing so when risk factors are present, including risk of violence to self or others, history of violent behavior or substance misuse, “serious, poorly controlled mental illness” or being part of “a demographic group at increased risk of firearm injury.”

What should health care providers recommend patients do with their guns?

The National Rifle Association and What You Can Do both offer tips on how to store guns safely, including using trigger locks and gun safes.

The Alzheimer’s Association advises that locking up guns may not be enough, because people with dementia may “misperceive danger” and break into a gun cabinet to protect themselves. To fully protect a family, the organization recommends removing the guns from the home.

But health professionals may be reluctant to recommend that due to legal concerns, said Jon Vernick, co-director of the Johns Hopkins Center for Gun Policy and Research. Most states allow the temporary transfer of firearms to a family member without a background check. But seven states don’t: Connecticut, Hawaii (for handguns), Massachusetts, Michigan, New Jersey, North Carolina and Rhode Island, according to Vernick. He recommends health professionals look up their state gun laws on sites such as the NRA Institute for Legislative Action or the Giffords Law Center to Prevent Gun Violence.

What happens when clinicians ask about guns?

Natasha Bahr, an instructor and social worker who works with geriatric patients at a clinic focusing on memory disorders at the University of North Texas Health Science Center, said as part of a standard assessment, she asks every patient, “Do you have firearms in the home?”

“I get so much pushback,” she said. About 60 percent of her patients refuse to answer, she said.

Patients tell her, “It’s none of your business,” “I have the freedom to not answer that question” or “It’s my Second Amendment right,” she said. “They make it sound like I’m judging, and I’m really not.”

Dr. John Morris, director of the Knight Alzheimer’s Disease Research Center at Washington University in St. Louis, said he asks his patients about firearms in the context of other safety concerns. When safety is at risk, he typically advises families to lock up firearms and store ammunition separately.

“People with dementia typically lack insight into their problems. So they will protest,” he said. Dementia is characterized by “the gradual deterioration not just of memory but of judgment and problem-solving and good decision-making,” Morris noted.

In one case, Morris said, he had to persuade the daughter of a dementia patient to secure her father’s hunting rifles. Uncomfortable with the role reversal, she was reluctant to do so.

“It’s very difficult to tell your father he can no longer have his firearms,” Morris said. The father responded: “I have never misused my firearms. … It’s not going to be a problem,” Morris recalled. “But, he’s remembering his past history — he can’t predict the future.”

Eventually, the daughter decided to remove the rifles from the home. After a few weeks, her father forgot all about them, Morris said.

Morris said the story highlights how difficult it is for families to care for people with dementia. “They’re forced to make decisions, often against the persons’ will,” he said, “but they have to do it for the person’s safety and well-being.”

KHN’s coverage of these topics is supported by Gordon and Betty Moore Foundation, John A. Hartford Foundation and The SCAN Foundation