What are the concerns when loved ones undergo brain surgery?

This is the sentiment expressed by Sister in “The Vicissitudes of Travel” from co-creators Jennifer Blaine, actress, and Karen Getz, director. It plays during FringeArts at the Philadelphia Ethical Society on Sept. 16, 7:30 p.m., and Sept. 22, 7:30 and 10 p.m. (Tickets)

The participatory experience is a solo performance in which Blaine plays the roles of Sister, Child, Mother, and Brain Tumor, leading a group of “friends” (the audience) on a bus tour of Brother’s brain surgery.

The production has roots in Blaine’s own life. About nine years ago, her brother was diagnosed with a brain tumor, underwent surgery, and recovered in an intensive care unit. 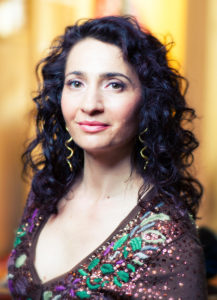 “That affected me so deeply,” she said. “I felt so upended really that I was writing a lot about it because it shook me so much…”

Her goal, however, is to tell not an autobiographical story but “a universal story.”

Blaine and Getz use memories of Brother’s life to illustrate his relationship to each of the characters. Sister distributes mason jars so that the audience can scoop up these memories for safe keeping. Brain Tumor encourages the collection of memories as well so the audience may analyze real memories from “memor-x,” raising the point that not all of what the audience “sees” is trustworthy.

Memories are described to the audience by characters seeing different visuals in Brother’s brain. For Sister, these include the night sky over the camp the two siblings attended, shoes she wore on their trip to Paris, and the rockets she was allowed to help her brother launch. For Mom, it is a sketch Brother created at the age of 7. For Dad, the image of a pool triggered the memory of a near-drowning incident involving the whole family. For Child, it was “Door of the Sun,” a painting she would look to at dinner while her dad talked and talked and talked.

Other characters, such as Uncle Mac, help to advance the actions and provide comedic relief. Uncle Mac questions whether they should be scooping memories without Brother’s permission. He also questions the reliability of memory. He says you have to “get them when they’re fresh — like sea bass.”

In one powerful scene, Sister asks Brother about his path and what to do next. His response: “I don’t know. But does it matter?”

Throughout the show Blaine transitions from one part to the next through varying voices and mannerisms, from the slouch and slow drawl of Brain Tumor to the high-pitched excitement and unsure hand gestures of Child. Minimal props and production were used, in keeping with the values of Getz’s company Chalk, Chair & Broomstick, of which the show is a part.

“I always have been doing comedic shows with the notion, the main premise, to get at deeper issues, more serious issues, but be able to bring some humor to it,” Blaine said. “I also wanted to make something beautiful out of something that was so hard.”

Getz said she hopes the audience feels empowered and given license to question things in their lives they might not have considered before — how we relate, how we love, how we connect.

“I like making people’s brain’s hurt, in a good way,” Getz said.

After the play, attendees are encouraged to join in creating art, working on a collective collage to express their experience or the connection they have made with the show.

“Whatever creative impulses — express them,” Getz said of the audience.